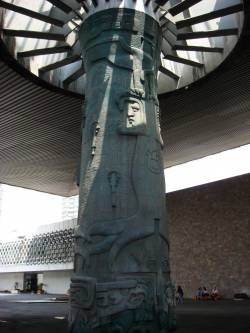 Built in 1964 by Pedro Ramirez Vasquez, the structure revolves around a giant pylon that supports, by means of steel rods, the roof from which descends a scenic waterfall.
At the entrance stands a giant statue of the god Tlaloc. The rooms follow chronologically the evolution of pre-Columbian civilization, the museum has very clear approach that allows to understand the intricate interweaving of the various civilizations that have lived in these regions through time.
Archaeological and ethnographic collections relating to the various current Indian population are unparalleled. The museum has also a restaurant and a well-stocked bookshop.
Immediately after the taquilla, there is room on the right of temporary exhibitions, on which follows that of Mesoamerica, with the map of the location of the various centers and a comparison between the different pre-Hispanic cultures. in the Hall of Teotihuacan, thre is the copy of the Mural Tlalocan on which you look at the conception of the world beyond, there are some elements of the Temple of Quetzalcoatl, with the heads of the Plumed Serpent. The monolithic sculpture of 57 tonnes of water goddess Chalchiuhtlicue and, in a display case, encrusted with turquoise and coral, funeral masks. 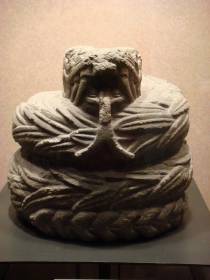 Head of the plumed serpent 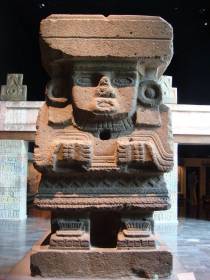 Statue of the goddess Chalchiuhtlicue 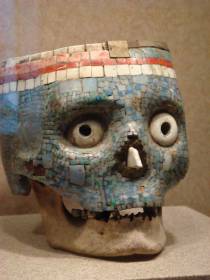 The Sala Mexica is the most important room of the entire museum dedicated to the Aztec culture, in the opening it has a sculpture of an ocelot, which were placed the hearts of human sacrifices intended to fuel the Sun.
In the room there is the city of Tenochtitlan reconstructed model, the Aztec calendar, an 24 tons circular (a diameter of 3.60m) stone filled with reliefs and the statue of Coatlicue, of the goddess of Earth. 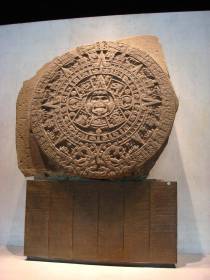 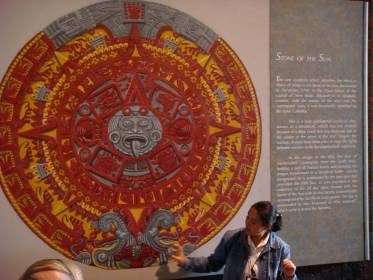 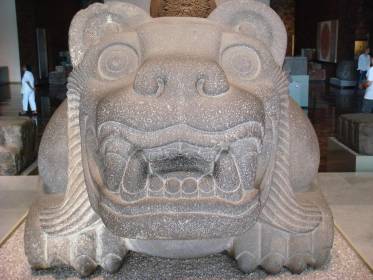 Sculpture of an Ocelot 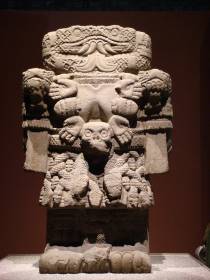 At the zoo we went a bit as a joke to do a short tour before heading towards the city center… the joke lasted several hours. The zoo is huge, an uncountable number of races from all continents including aviary and reptile house that we could not see since the zoo closes at 17:00 (as virtually all museums in Mexico) and all visitors must be out.
It was exhausting.