You can not see all of this huge city in a single day!
Mexico City often suffer from bad publicity even by tour operators. The tourist areas of the city and the districts themselves are not so dangerous as they say. However, it is better not to walk around the city wearing valuables and be careful.
The city traffic is very intense. When you do not know the city the best means of transport is by taxi. Taxis in front the hotels are recommended because the drivers are bilingual and can wait during your visits. Simply agree on a price before departure according to your itinerary.
To get an idea of how is the everyday live in Mexico City is absolutely necessary to use one of the many buses that “fly” in the city traffic. They are numerous and all crowded, the peculiarity is that there are not “stops”, wherever you find one, just make a sign and you can literally “jump” on board. To use the bus requires a fair amount of balance in order to remain standing, and a greater amount of agility and coordination for both go down and, above all, to go up (the brakes are used very little). 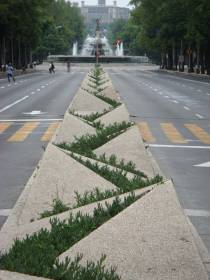 Paseo de la Reforma: the main street also called “Les Champes-Elysées” of Mexico City, situated between the Museum of Anthropology and the Old Town.
The last Sunday of August it is closed to traffic due to a maratona, so the whole Paseo de la Reforma was available to the families, pedestrians and cyclists.

As you move away from the old town to southwest, the old construction become rarer and give way to modern buildings, which enhance with their grandeur and majesty the political and social role of the city. It is a very spectacular part of Mexico City, where it is concentrated the best of the capital, all the luxury and all the wealth.
Paseo de la Reforma is the main artery of the city, 15km long and wide up to twelve lanes, begins from Avenida Juarez and finish at Chapultepec Park. Wanted by Maximilian of Austria to give a European tone to the capital, the Paseo is lined by trees and statues of heroes and leaders. It was completed by Porfirio Diaz. Along its path is filled by super-luxury hotels, banks, financial companies offices and trendy shops. After Plaza de la Repubblica, there is the Glorieta Cristobal Colon, a roundabout with a statue in the center of the Genoese navigator, the work of French Charles Cordier (1877).
At the intersection with Avenida Insurgentes is the Glorieta Cuauhtemoc, with the monument to the last Aztec emperor. At the junction with Avenida Florencia, is the Glorieta El Angel, a roundabout with the Independence monument consists of a tall column with golden angel on top (1910). 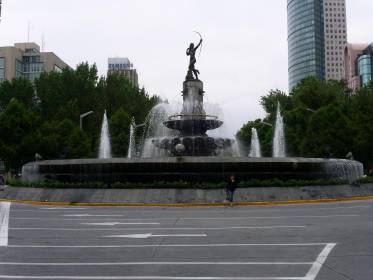 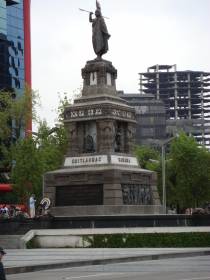 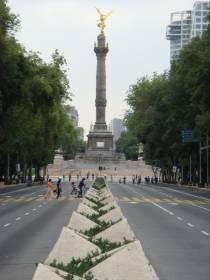 At the end of the way there are six thin columns of the monument to Los Ninos Heroes (at the entrance to Chapultepec Park) built in honor of the six National Military Academy cadets who sacrificed to defend the city from North America (September 17th, 1847). 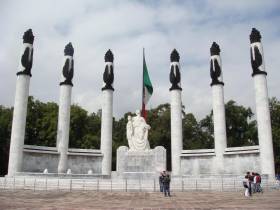 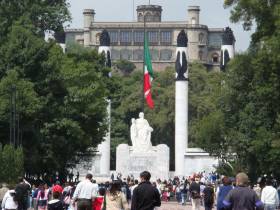 In the Nahutatl language Chapultepec means “hill of grasshoppers”. The namesake park is the green lung of this asphyxial city is crossed by the Paseo de la Reforma. More than 840 hectares of parkland studded with museums and playgrounds. On top of a short hill stands the Castillo.
The park was the hunting and the summer palace of Moctezuma. The Castillo, starting in 1785, became the residence of the Spanish viceroy, then home to the National Military since 1843, and finally since 1864 home of Maximilian and Charlotte of Austria during their adventure in Mexico. The Presidents of Mexico lived there up tp 1940, when Lazaro Carena transformed it into the History Museum. In the rooms you can admire relics of the Revolution and two large murals, one of Siquierios and the other of Camarena. 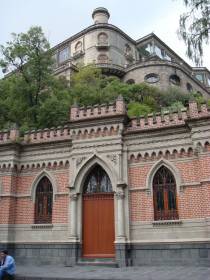 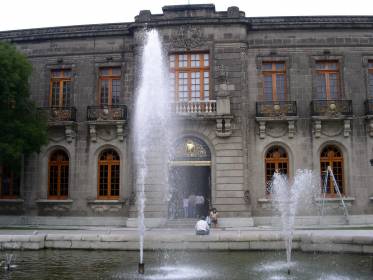